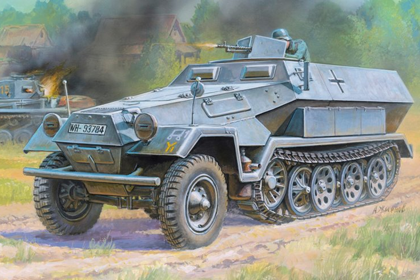 In 1937 Hanomag was appointed by the German Wehrmacht to develop a medium semi-tracked armored personnel carrier, capable to accompany the tanks of the Panzer Divisions. Production started in 1939 and continued until 1943.

The 251 served as basis for many variants, over 4000 units were built in total. This is the basic version armed with two 7.92mm MG-34’s. The vehicle reached a maximum speed of 50km/h and had a range of 300km. It was able to carry 12 Panzer grenadiers.