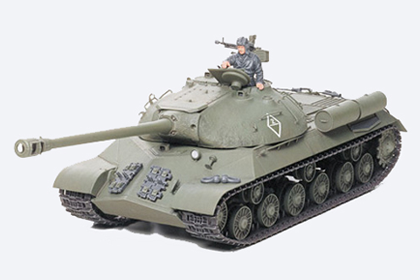 On September 7th 1945, the allied nations were staggered by Russia’s disclosure of their JS-3 heavy tank at a victory parade in Berlin. Although coded a “JS” (Josef Stalin) tank, it had a totally different appearance from its preceding models. The one-piece cast turret had a simple flattened hemispherical shape. The maximum thickness of the turret armor reached 250mm. The front hull was constructed by welding three 120mm thick armor plates, forming a shape like a ship’s bow. The main armament used the same L/43 122mm gun as the JS-2.

The 520 horsepower diesel engine provided 40km/h of maximum speed. With the concerted effort of the talented Russian tank engineers such as N.L Jukhov and Z.A Kotin, the prototype was completed in October 1944 and the mass production began in the following year.

There have been a lot of controversy concerning whether or not the JS-3 saw any fighting during the Berlin campaign. At least one regiment was equipped with the JS-3 by then, but it’s still uncertain if they were committed to the actual fighting. Other sources claim that it was first deployed in combat against the Japanese in Manchuria in August 1945.

Incorporating several modifications, its production was continued until 1951 and about 1,800 JS-3’s were produced. Its simple and effective turret and hull configuration deeply influenced not only the following Russian tanks, but also fighting vehicles of the western nations.