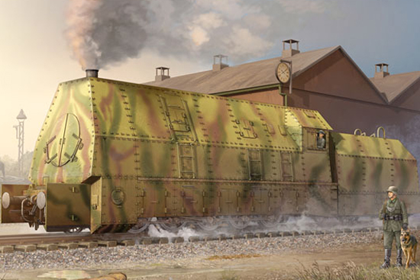 Germany had used armored trains in WWI, but prior to the start of WWII the armored train was seen as something of a relic by the German defense force, the Reichswehr, and its government renamed successor in 1935, the Wehrmact.

The Deutsche Reichsbahn-Gesellschaft (DRG), or German National Railway between 1920 and 1945, saw armored trains as a way to preserve and advance a military presence. By keeping a strong military face on this state owned railroad.

The BR57 armored trains locomotive was actually based on the Prussian series G10 locomotive first built in 1910 and featuring an 0-10-0 wheel arrangement.