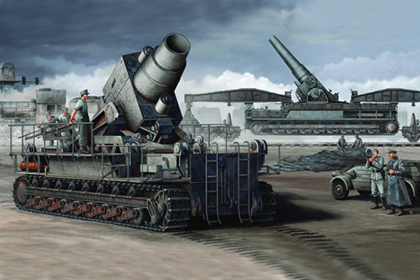 At a conference with Hitler in March 1943, it was stated that the first 54cm Gerät 041 would be delivered by June 1943, and the third, by mid-August. The 60cm and 54cm barrels appear to have been interchanged as required. In 1945, US forces captured vehicle II with a 60cm, and vehicle V with a 54cm. The prototype chassis, built in 1939, had eight road wheels with external swing arms. Production Karl had eleven road wheels.

Ammunition was transported in a tracked Munitionsschlepper converted from the PzKpfw IV, four rounds in each Schlepper. For the 60cm Gerät 040, the s Be Granate weighed 2.117 tons and the Ie Be Granate, 1.70 tons; in this case of the 54cm Gerät 041, 1.58 tons and 1.25 tons respectively. Maximum rate of the fire was 6 rph (rounds per hour). Guns I-IV went to the Russian Front in July 1941 with the 628th schwere Artillerie Abteilung. They saw action at various sites, including Lemburg in that year.